After Years of Decline, Household Formation Rates Were Improving Pre-Pandemic. Now What?

There would be some 5.7 million additional households today if Americans formed households at the same rate they did in 2006, a testament to widespread difficulties in securing affordable, accessible housing over the past decade-plus but also a potential indicator of enduring housing demand to come.

Home values nationwide plummeted between 2007 and 2013, taking the U.S. economy with them, but have since come roaring back over the better part of the last decade as the economy gradually recovered from the Great Recession. But this recent years-long housing recovery was missing an accompanying recovery in newly formed households, with the number of households headed by almost every demographic group steadily declining. That decline finally showed signs of leveling off and reversing by 2019, on the eve of the pandemic, but that progress may prove delicate and could delay millions of Americans from striking out and making a home of their own into the next several years. 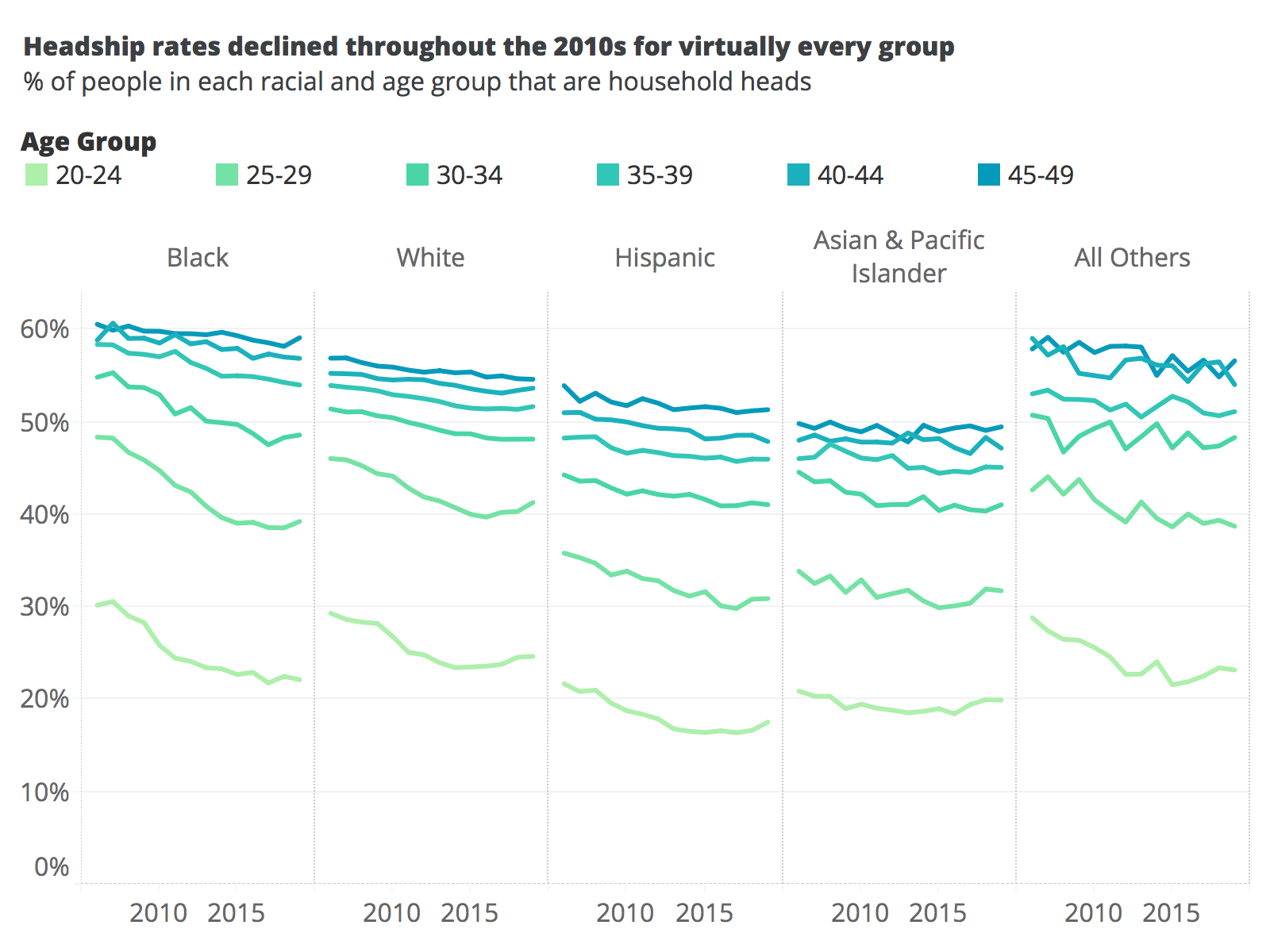 The simplest explanation for why household formation fell much more quickly over the past decade or so is that for much of that time, Americans faced a handful of unique financial challenges. First, massive amounts of savings and equity were lost in the 2008 financial collapse and subsequent foreclosure crisis, impacting the ability of both older generations to retire and younger ones to shield their children from substantial college debt. At the same time, job opportunities and incomes fell precipitously from 2007-2011, which has long-lasting effects on individuals’ ability and confidence to start a new household. And finally, at points during the recovery (notably from 2015-2017), rapid growth in home prices widely outpaced income growth over the same period, making it difficult to save for a down payment or the often substantial upfront costs of renting. Either way, would-be household heads of virtually all ages remained entangled with other family or roommates instead of creating a household of their own.

By 2018 and 2019, the broadening economic expansion seemingly began to finally outweigh these effects, with most demographic groups — especially twenty- and thirty-somethings — beginning to get their own homes at higher rates closer to historic norms. But even after the turnaround of the past two years, young Americans especially remain much less likely than prior generations to have a place of their own. The effect is most dramatic for 20-to-34-year-olds: Only 35% of this group were household heads in 2019, down from 39.2% in 2006. In other words, only 22.72 million of the 64.5 million total individuals in this group succeeded in becoming heads of their own household.

If this age group had succeeded in creating newly headed households at the same rate as people their age did in 2006, there would be 12% more, or an additional 2,817,000, households on top of that 22.7 million — bringing the total number of 20-to-34-year-old householders to 26 million. To put that in perspective, that “shortfall” of 2.8 million households is more than twice the number of new homes built in the United States in 2019, when 1,386,000 new homes were completed.

Despite the fall in the rate of new household formation, the housing market has still seen significant gains in the number of households, and will soon see even more, largely because of the size of the maturing Millennial generation. Even at 2019’s low age-specific headship rates, the surge of Millennials moving from their low-headship 20s into higher-headship 30s will mean 6.4 million more households by 2025, an increase from 130.5 million to 137 million, using Census population projections.

The narrative that younger generations are and will be delayed in life’s major events includes the assumption that they will eventually catch up,  ultimately hitting the same milestones as previous generations. But the ever-falling headship rate across all ages changes that narrative, and signals that many more may never hit those milestones, that housing fundamentals have changed and that household formation and homeownership are more difficult. The Great Recession and financial collapse that cost U.S. homeowners roughly $6 trillion in home equity wealth simply sped up the process.

Home building collapsed during the Great Recession and remained at depressed levels for several years. More new homes were completed in 2019 than in any other year of the past decade, and still there were far fewer homes built last year than in any other non-recession year in the postwar era. Particularly when adjusting for population size, which is key for predicting household formation, we are now building only about 2.6 single-family homes per 1,000 Americans, compared to a historical average of almost 4. Some of the challenges holding back new construction include a shortage of buildable land and the financing to acquire it; shortages of labor, as job openings for construction workers remain unfilled; and onerous permitting processes that add time and cost to the construction process.

On the eve of the pandemic, there were promising signs of a significant rise in new home construction, with new home starts exceeding 1.5 million (annualized) each month from December 2019 to February 2020. Those numbers came crashing down in March but builder confidence has come roaring back, and now October 2020 once again saw construction begin at an annualized pace above 1.5 million homes, suggesting a robust pipeline of expanded housing supply in the near future.

New households are formed by both renters and home buyers, but the first-time home purchase in particular has gotten harder as saving for a down payment in an environment in which home price growth rapidly outpaces income growth gets increasingly difficult. Higher student debt loads and rising rent burdens contribute to savings difficulties. But even if first-time buyers managed to save the same share of their income as their parents’ generation, thanks to rapidly rising home prices and the steady increase in price-income ratios,  it would still take them years longer to save an adequate amount.

Despite the difficulties, progress was being made. Among 25-to-29-year-olds (the age range with the largest shortfall in households in 2017 relative to 2006 rates), the headship rate rose from a low of 37.1% in 2016 to 38.1% in 2019. And the increase was fairly uniform across race: The headship rate for white, Black, Hispanic, and Asian Americans & Pacific Islanders in this age range rose by 1.1, 0.7, 1.0, and 1.3 percentage points, respectively. This suggests that when America experiences a long-enough economic expansion — like the record-long period of growth that ended abruptly in March — then the economic freedom to set out and head a household at 2006 levels may just be within reach.

If and when the economy begins recovering again once the pandemic has passed, it may very well be that the best outcome will show that the decline in headship was only temporary and that demand for homes that may have been satisfied this year will simply be pushed into next year and beyond. Even so, in only a few short months, the pandemic has proven how delicate progress can be. Millions of young adults moved back in with their parents in the early months of the outbreak, and while recent data suggest about half of them have already moved back out, big unanswered questions remain.

Will the rest of Gen Z be able to keep setting out on their own, or remain set back for years to come like Millennials were in the wake of the Great Recession?

Learn more about our partners at Zillow by checking out their blog.