Despite a market tilted decidedly in their favor — with demand sky-high and inventory at rock bottom — potential home sellers are largely staying on the sidelines, citing a variety of personal financial, lifestyle and/or health concerns as major reasons.

Only 1% of homeowners recently surveyed by Zillow said their homes were currently listed for sale. Among the 99% whose homes are not on the market, more than a quarter (26%) said they were concerned they would not be able to find or afford a new home once their current home was sold, the most commonly cited reason for not selling. General life uncertainty (22%) was the second-most common reason, followed by anticipation of a more favorable sale price if they wait (21%). 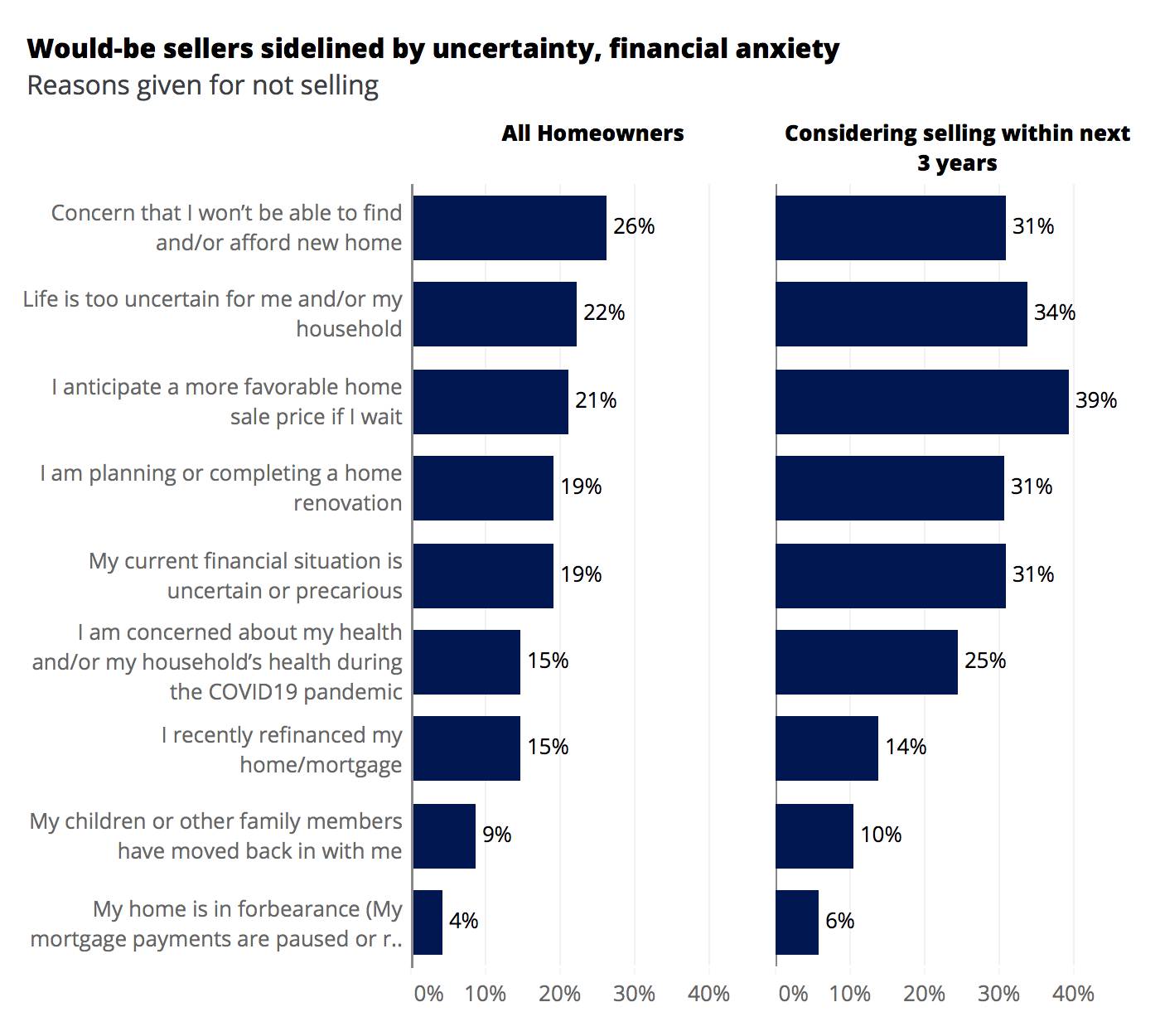 Reasons for not selling vary by age group: More than a third (35%) of Gen Z and Millennial homeowners said their plans for or completion of a home renovation was a main reason to stay put, compared to just 21% and 14% of Gen X and older homeowners, respectively. Younger homeowners were also more likely to cite concern about COVID-19 (20% of Gen Z and Millennial and 18% of Gen X) as a reason for not selling than Boomer and Silent Generation homeowners (11%).

Some homeowners realistically may simply enjoy their current home and have no need or desire to sell and move any time soon. But among homeowners considering selling within the next 3 years, 39% said they anticipate a better price if they wait. Among those who are not currently considering selling, but may be open to it after 3 years, 39% cite concern that they won’t be able to find or afford a new home.

Concern over finding or affording a new home among those more likely to sell in the near-term was a bit more muted, but still very real: Almost a third (31%) of homeowners considering selling in the next three years say their plans are paused because they are concerned about finding or affording a new home. The findings are a clear example that selling a home can sometimes cut both ways: According to the 2020 Zillow Consumer Housing Trends Report, almost two-thirds (63%) of sellers are also buyers. But while these dual-track homeowners may be able to sell their home for top dollar, they will also turn around and enter an extremely competitive buyers’ market where homes are going under contract in 12 days.

Given the historically low mortgage interest rates that many home buyers and homeowners can enjoy these days, it may come as little surprise that 15% of homeowners report a recent refinance as a reason for staying put — but their planned uses for their newfound financial flexibility are very different. Among respondents that cited a recent refi as a reason to stay put, a majority (54%) said they would use their savings to pay off debt. Exactly half said they would use the savings for home improvements or saving for retirement. 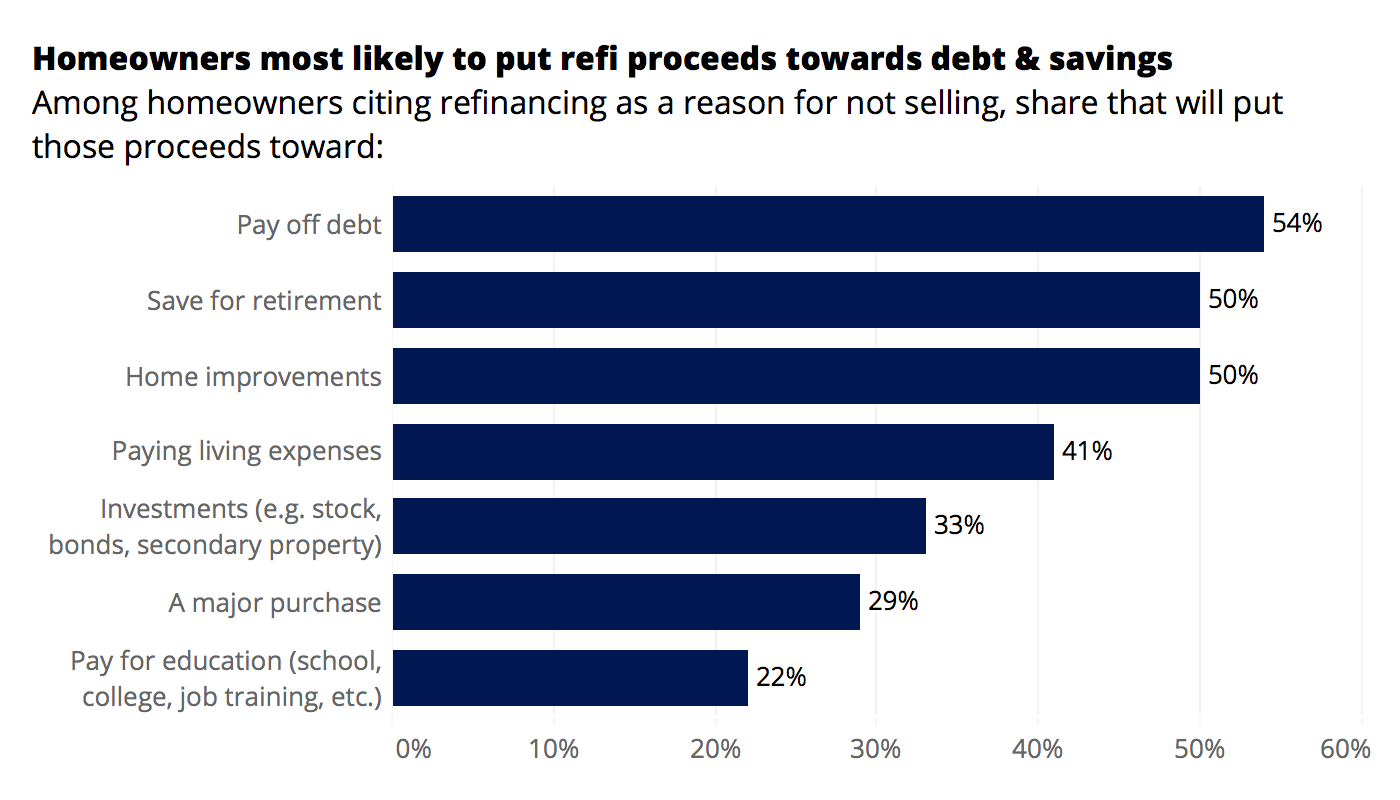 General life uncertainty, especially given the ongoing pandemic, high unemployment and volatile economic conditions, is a main factor keeping more than a third (34%) of those considering selling in the next three years out of the market. Among these homeowners hesitant to put their home on the market now, a quarter said they weren’t selling because they were concerned about their household’s health and safety during the pandemic.

Financial anxiety, again likely attributable at least in part to the pandemic, is another big factor keeping those that might sell sooner on the sidelines: 31% of homeowners considering selling in the next three years said a currently uncertain or precarious financial situation is a reason to stay put. More than a quarter of these would-be sellers (27%) reported a recent change in employment with a decrease in hours or pay, and 17% said they or their spouse/partner were laid off or involuntarily unemployed. Among sellers who may be considering putting their home on the market in the next three years, 6% said they are currently taking advantage of mortgage forbearance programs that allow them to delay or defer monthly mortgage payments.

In this brief, “homeowners” refer to household decision makers who own their primary residence and have not moved in the past year.

Zillow Group Population Science collected a nationally representative sample of more than 1,000 homeowners (household decision makers that own their home and did not move in the past year). From September 29th to October 5th, 2020 the survey asked homeowners questions about their plans to sell and recent life events. Among those who did not have their home listed for sale (99% of the sample), the survey also asked why they were not currently selling.

To achieve national representativeness, quotas for age, ethnicity/race, education, income, region, relationship status, and sex limited oversampling of any given demographic group. In addition to quotas, ZG Population Science used statistical raking to weight the sample to the US Census Bureau American Community Survey 2018 sample of homeowners. Weighting used the same variables as the quotas. Margins of error are at a 95% confidence interval.

For more information from our partners at Zillow, check out their blog.