What are the Top Affordable U.S. Suburbs With a City Feel?

Increased opportunities to work remotely are pushing more Americans to rethink how and where they want to live. But even if there’s less of a need to live as close to urban job centers, traditional urban amenities — think restaurants, nightlife, museums and sports venues — remain a big draw and demand for city living remains high. As a result, many buyers may seek places that balance the space and affordability of the suburbs, while still maintaining that big-city feel.

A new “Cityness Index” created by Zillow and Yelp Inc. helps identify the U.S. suburbs that best strike that balance. Key metrics include housing affordability compared to the nearest big cities and to the country at large, housing availability, the mix and diversity of businesses — including restaurants, nightlife and the arts — and consumer reviews and check-ins.

Zillow data shows extremely strong housing demand driven both by incredibly low mortgage interest rates and more millennials and Gen Zers reaching prime home buying age. This desire to move is also reflected in a recent Zillow survey of people newly working from home because of the pandemic, with almost two-thirds of respondents saying they would consider moving if they had the flexibility to work from home occasionally. The opportunity to telework could also give almost 2 million current renters an opportunity to relocate and buy a home in a more affordable area. There very well may be a “Great Reshuffling” on the horizon.

This demand is also driving up prices and depleting inventory. But using this data, it is possible for young people looking to buy and find space for their expanding families to bid farewell to big city premiums without giving up the feel of a city in amenity-rich suburbs.

Hundreds of suburbs nationwide were scored on the index, and we identified the highest scorer in each of the 50 largest U.S. metros. Waterbury, Conn., near New Haven and Hartford, topped our list, beating out Lowell, Mass. for the top spot. Filling out the top five are Joliet, Ill.; Sunrise, Fla.; and Pasadena, Texas.

Zillow and Yelp’s top 10 affordable suburbs with a city feel: 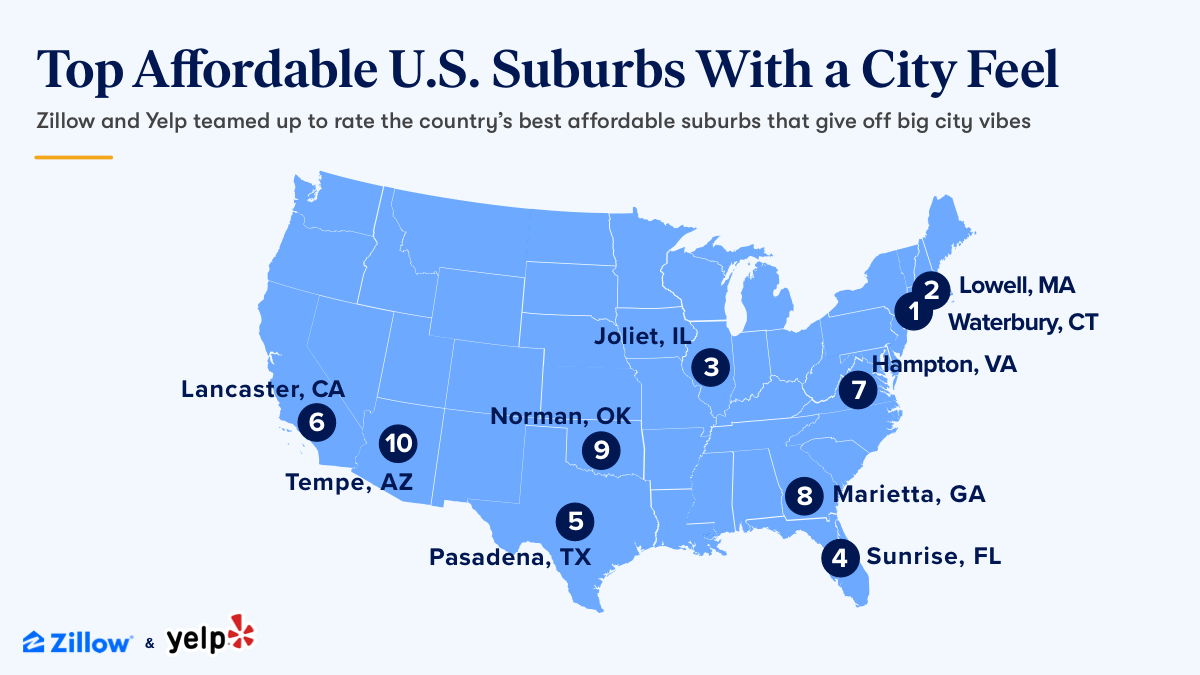 Nestled between New Haven and Hartford, Waterbury has a quintessential New England feel. Downtown Waterbury boasts the historic Palace Theater, the Mattatuck Museum for art lovers and a University of Connecticut satellite campus.

Located near the New Hampshire border about 25 miles northwest of Boston, Lowell offers a great balance of city-like amenities with suburban conveniences. Residents can immerse themselves in the history of America’s Industrial Revolution at Lowell National Historical Park or take a casual stroll along the Merrimack River, which winds through downtown Lowell.

Home values in Lowell are about half those in Boston. Brockton, Mass., also scored highly in our Cityness Index, demonstrating the number of affordable, livable city/suburb options available in the Boston area.

Joliet is perhaps best known for being home to the Chicagoland Speedway, but there’s plenty more to this Chicago suburb.

Nearby Aurora almost made the list, but Joliet’s housing affordability advantage gave it the edge. The typical home in Joliet is about 40% less expensive than the typical Chicago home.

Minutes away from the beach and the Everglades, natural beauty is never far when you’re in Sunrise. For sports fans, Sunrise is home to the NHL’s Florida Panthers and several golf courses.

Multiple Miami suburbs scored well in our Cityness Index, including Delray Beach and Boca Raton, but none beat Sunrise’s mix of affordability and city-like amenities. The typical home in Sunrise is 36% less expensive than in the city of Miami.

About 15 miles southeast of downtown Houston you’ll find Pasadena, home to one of the largest urban wildlife preserves in the U.S.

Pasadena offers an affordability edge over Houston, with the typical home value 14% lower.

Lancaster is located near the north edge of the greater Los Angeles area, within the Antelope Valley. Tens of thousands of visitors flock to the area each year for the California Poppy Festival to view more than 1,700 acres of the state’s official flower.

Housing affordability relative to the area shot Lancaster into the top 10 — the typical Lancaster home value is less than half that in the city of Los Angeles.

With the Chesapeake Bay to the north and east and the busy harbor at Hampton Roads to the south, Hampton residents have plenty of options for water and beach activities.

Marietta is about 20 miles northwest of Atlanta, and offers residents easy access to Interstate 75 and everything Atlanta has to offer. This suburb’s spot in the top 10 is due in large part to its affordability. Although typical home values in Marietta are slightly higher than the city of Atlanta, it’s still relatively affordable compared to other nearby suburbs including Canton and Smyrna.

Known for its abundance of nature and parks, the culinary scene rivals that of Atlanta, according to Yelp.

Home to the University of Oklahoma, Norman offers a small-town atmosphere with a vibrant nightlife and plentiful coffee shops and parks. Yelp users also give the local restaurant scene high marks. Homes in Norman are generally more expensive than those in Oklahoma City, but remain more affordable than the typical U.S. home.

Just east of Phoenix and home to Arizona State University, Tempe is known for a bustling performing arts scene. Locals and tourists alike also enjoy soaking in the surrounding scenery while kayaking and paddleboarding at Tempe Town Lake.

Tempe home values are up 10% from last year, indicating a strong housing market. Listings are also up nearly 3%, offering extra housing options available on the market.

The Cityness Index is designed to highlight cities with vibrant amenities and relatively affordable housing, which result in a city-like environment in a more-affordable suburban region. Any city not included in the official name of a metropolitan area, as defined by the U.S. Census, were counted as a suburb in this analysis. The highest-scoring suburb in 50 of the largest U.S. metro areas were considered, with the highest scores among those making it into the final top 10 list of the most city-like suburbs.

There were four individual Yelp indicators evaluated for each suburb to determine its cityness.

Among these, the mix of businesses indicator was given most weight.

The mix of businesses were found by comparing the distribution of open businesses across its major business categories, such as home services and restaurants, in each candidate city with the average distribution in several of the largest U.S. cities. Diversity of business type was measured across two sectors: (1) restaurants, food, and nightlife; and (2) the arts. Suburbs were compared by how many unique types of businesses, such as piano bars or diners, are present. Consumer activity was measured as the number of page views, reviews, and photos per business.

Zillow analyzed five main variables. The most impactful variables were targeting affordability of these suburbs compared to the principal cities in the metropolitan area and the US overall:

The other housing related variables were targeting the availability of for sale, new for sale, and rental inventory:

In each of the Zillow variables, multi-unit housing was given extra weight in calculating inventory to emphasize housing availability in more dense, city-like parts of town.

The collection of Yelp indicators and Zillow variables were each given 50% of the overall weight for the final index. Scores reflect data from June 2020 to August 2020.