Luke, our beloved orange French bulldog mascot, has been with us since NextHome’s inception. Since 2014, his presence has caught the eye of real estate professionals and consumers alike as he helps people find their next home.

Like any four-legged friend who joins the family, Luke has a birthday that is celebrated each year, landing on June 15th. In 2019, NextHome set aside June 15th as “Luke Day” to celebrate Luke by participating in community service and outreach.

NextHome offices across the country use this special day as an opportunity to step away from business and come together to serve our local areas and the people and pets that thrive there. Events range from food and school supplies drives to pet vaccine clinics and adoption events.

“At NextHome, we know how much joy pets can bring to our homes and hearts,” said James Dwiggins, Chief Executive Officer of NextHome, Inc. “It is so important to highlight and support the great work that animal rescues do to save pet’s lives, support pet owners, and help nurture a sense of joy in our homes.”

With it being a year later now, we’re taking a look back at our inaugural Luke Day with the story of Sally, one of the animals available for adoption that day. 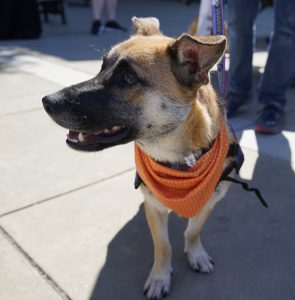 The sniffing and sizing up in the park last summer began benignly enough, but Shooie the dachshund couldn’t have imagined where this relationship with the energetic rescue puppy was heading. Neither could Shooie’s owners, Joel and Veronica Stein.

The dogs met at NextHome’s annual Luke Day in 2019 and the Stein family grew by four paws that day in June.

“We don’t regret for a moment adopting Sally,” Veronica said of their German Shepard-looking rescue Sally. “She is a great addition to our life.”

At the mention of his new sister, the Stein’s five-year-old dachshund tipped her head.

“Shooie is glad she is here too,” Veronica added with a smile.

For the past year, Shooie and Sally have continued sizing each other up, but their love has grown. The mellow dachshund has learned to tolerate Sally’s energy and Sally has taught Shooie a thing or two about the importance of backyard squirrels.

“They’ve learned to get along over the past year,” Veronica said. “Now when we leave with Sally, the first thing she does when she comes home is look for Shooie.”

Together, the furry friends have developed a tag-team system for barking at backyard intruders and welcoming front door visitors. Sally has taken up the role of underfoot kitchen companion while Shooie contentedly secures his spot on the couch.

“Sally likes to stay close,” Joel said with a smile. “You could be doing something in the kitchen and she plops down two inches from your foot. She definitely likes to follow you – until something diverts her attention and she wants to go outside.”

Those outside distractions include her fascination with the cluster of squirrels who scurry along the back fence, taunting the excited puppy.

“Those squirrels will sometimes turn around and flip their tails at her, almost as if they know what they are doing,” Veronica said.

Sally’s love of the back-fence squirrels is only rivaled by her excitement over a good garden hose spray.

“She loves the water,” Joel said. “When we have the garden hose out, she jumps and nips at the water and can’t get enough of that.”

Life wasn’t always so fancy-free for Sally. As a young pup, Sally’s loving personality was sheltered and nurtured by ARF. The nonprofit organization’s core mission is the rescue of dogs and cats who have run out of time at public shelters, giving them a chance at life until a new home can be found.

As NextHome celebrated Luke Day in 2019, several cats found forever homes, but Sally was the one and only dog available for adoption.

“We had been talking about adopting a dog as a companion for Shooie, so when our sons called and told us that there was a dog we might really like available at Luke Day, we drove over,” Veronica recalled.

As Shooie and Sally sniffed and scampered and played that day, Joel and Veronica knew they might have found the right addition to their family.

“In everybody’s opinion, they were a great match,” Veronica recalled. “They were the same size, plus they weren’t all over each other and didn’t fight. It just seemed to work, so we took the chance.”

As previous rescue parents, the Steins were also impressed with ARF and it’s caring approach to adoptions.

“We have been fortunate to adopt our animals from good rescue organizations, particularly Tony La Russa’s ARF,” Veronica said. “ARF offers training resources and contact information for veterinarians and pet insurance companies. When we adopted Sally, ARF provided a lot of educational materials and support, as well as starter food and, get this, toys! It was a pleasure working with them.”

As experienced rescue parents, the Steins will also be the first to tell you that adopting an animal isn’t easy.

“Don’t underestimate what the challenges might be,” Joel said.

Veronica added that new owners should always take advantage of any training opportunities and keep their expectations reasonable.

“There is an adjustment period,” Veronica said. “Dogs just love people and they want to be your special friend. They watch you, but it takes time to make that true connection.”

One year after her adoption, Sally and the Steins are still working daily to build that connection, but not one of them would have it any other way.

It warms our orange hearts that Sally was one of many animals adopted on Luke Day. At NextHome, our mission is to enrich lives by helping people find their next home, and we couldn’t be happier to know that animals are finding their next homes as well with the help of caring NextHomies across the country.

Shifting back to the present day, it’s an understatement to say that 2020 has been a hard year for everyone. In light of the ongoing uncertainty of the pandemic that has swept the world, this year’s Luke Day celebrations have been postponed to July 15th to allow NextHomies more time to plan and prepare for a safe way to help their local communities.

This year, NextHome’s efforts will be focused on ways to support children in the local communities across the country where NextHome offices are located. With so much change in their day-to-day lives, with much confusion as to why, we hope Luke Day 2020 will bring smiles to their faces during these uncertain times. We’re excited to see ideas like adopting a classroom, sponsoring a graduating senior, and virtual book readings come to life – with lots of orange of course.

NextHome, Inc. is an independently owned national franchisor with a focus on changing the

closes over 23,000 transactions annually worth over $6.2B in volume.