We have all been in line at Starbucks or glancing into our back seat to see a thirteen-year-old gazing into their phone, furiously typing away with their thumbs flashing over the screen in a blur (sometimes with a wry smile or semi eye roll or fierce brow crinkle). And you probably thought, “What in the actual hell is inside that thing that is so interesting?”

The answer is: Social Media.

Why in the world would a forty-seven-year-old, self-admitted tech caveman be writing an article about social media? Shouldn’t we have some twenty-something wiz kid writing this?

Well, the truth is they could teach you more about the deep inner workings of the Facebook algorithm. By the way, Facebook is “soooooo last year” (you’ve got to read that in the annoying teenager voice). However, I am the perfect person to teach you the basics (because it’s all I know!) and what I have learned in the school of hard knocks of social media.

It is really pretty simple, so long as you keep four things in mind.

Want to learn more? Scroll your eyes on down the page then.

Finding your voice: The point of social media is, well, to be social. Think of Facebook as a giant cocktail party where you are overhearing snippets of people’s conversations. So be interesting. Share what you are interested in (unless it’s politics, there’s enough of that already). Share parts of your day – the interesting parts, not “in line at Starbucks.” Perhaps something you learned or observed today. For example, here is the highest liked/shared item I posted on Facebook this week. 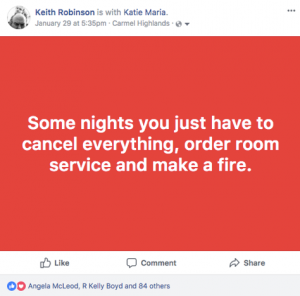 This post beat out hot tub disco lights with my five-year-old daughter and some pretty amazing (in my opinion) motivational quotes. It was just a quick thought, expressing a feeling that we all have felt. And it resonated.

I asked a friend of mine to describe my social media voice and here is what she said: “You’re a hashtag over user, FOMO (fear of missing out) creating, swear word motivational quote using funny man that I look forward to reading.”

Start small, but let your flag fly! Pronounce to the social media world in your own little (or big) ways that you are here. And let that voice of yours shine through. There is someone right now trying to find the way to express exactly what you are going to write and it will resonate.

Use Images: For better or worse, we are visual creatures. So use pictures when you can or even when you can’t. If you look at my “cancel everything” post above, it even looks more like an image than a “post.” Try to do a quick image search to find something that adds to, expresses or brings clarity to the point you are trying to make. Sometimes people don’t want to read, they just want to look. Instagram is proof of that. Use more images to drive higher engagement.

Keep it real(ish):  I hate to break it to you, but there is nothing “real” about reality TV. A friend of mine was on House Hunters once and he was already in contract and just about closed on the house that they “decided to write an offer on” in the show. Insert surprised face here. That big “which one of the three are they going to pick?” part of the show, at least on his, was totally staged. Social media is your own little reality TV show. And it is great to share your successes and even some of the things you’re working on (without being too negative), or little random pieces of your life. But you don’t need to discuss your divorce, for example, and you don’t have to share everything. You can keep parts of yourself, to yourself for yourself.

Consistency is greater than creativity: Oh man, do I think I am smart! I will craft what I think will be the perfect/hilarious/most awesome post in the history of the internet. I prepare to hit the share button with glee as I am pretty sure I am going to break the internet faster than a semi-nude Kardashian. And (drum roll please)… crickets. Nobody cares. And then other times, I will just pound out a quick little thought spontaneously and it is the thing that resonates the most with people. My advice to you is: don’t try to be perfect, just be consistent. It matters more. The more you do anything, the better you get at it.

Go boldly into that dark abyss that is social media. Bring your bright light to the space so you too can be the next SnapChat/Instagram/Twitter superstar. Or at least help remind the people who already know you, like you and trust you that you are alive, in the business and there to serve them.