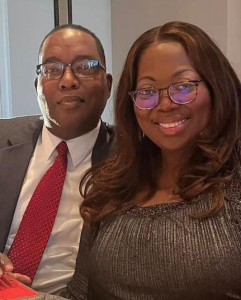 Pleasanton, CA — March 24, 2022 — NextHome is pleased to announce the opening of NextHome Authority in Charlotte, North Carolina. The brokerage represents the 559th office to join the NextHome franchise out of 572 active office locations across the country.

Ronda is NextHome Authority’s Broker in Charge. Reggie will focus on business development and client service.

Reggie has spent the past 13 years as a mortgage underwriter, loan processor, and mediation consultant. He has held his real estate sales license since 2019.

Ronda has a background in Business Administration/Accounting and is a registered financial representative that assists others in building generational wealth.  Ronda has been successfully serving real estate clients since obtaining her  license in 2005. She has been operating in real estate sales full-time since 2007 and since that time has remained a top producer.

“The highlight of my career has been my ability to help hundreds of buyers and sellers live in safe, happy neighborhoods and be able to acquire some form of wealth that will leave a legacy for their children and generations to come,” Ronda said.

A conversation with her daughter on the topic of creating a legacy inspired Ronda to consider opening her own franchised brokerage.

“My daughter who was seven at the time was the reason I left nursing to become a REALTOR® in the first place,” Ronda recalled. “I wanted to be able to volunteer in her classroom and go on field trips with my kids. Now, that little girl is 25 and just bought her first home. One day she asked me if I had ever thought about opening my own brokerage. We talked about how it wouldn’t only be for me and my clients, but it would leave a legacy for my two little granddaughters.”

Reggie and Ronda laugh about the experience now as the owner of their own NextHome franchised office.

“A NextHome Authority client will get top-of-the-line professional service,” Reggie said. “We place our clients first and foremost and their needs will always top our priorities.”

Both Reggie and Ronda are excited to partner with a company that puts people first.

“Many other companies say that they put humans over houses, but NextHome truly delivers on that promise,” Reggie said. “We love being a part of a company that treats people with dignity and gives back to the communities it serves and encourages others to do the same.”

Ronda and Reggie are also thrilled to offer both clients and agents NextHome’s suite of industry-leading support and technology.

“The technology and training positions NextHome owners and REALTORS® to succeed,” Ronda said. “I also love how the franchise is recognizable while allowing some flexibility for agents and owners to personalize to their target market.”

When not selling real estate, Reggie and Ronda are passionate about giving back to their country and community. Reggie is a U.S. Navy veteran who also did a joint tour with the Marine Corps in Operation Desert Storm.

Ronda is a member of the Alpha Kappa Alpha Sorority where she volunteers in programs of service to benefit communities locally and abroad.  In addition Reggie and Ronda volunteer at their church.

Reggie and Ronda have been married for 20 years and together they have a blended family of five grown children and three grandchildren.

Please join us in congratulating Reggie and Ronda on the opening of NextHome Authority in Charlotte, North Carolina!