Providing a prediction for 2021’s economic outlook seems a little silly, because if anyone had a 2020 forecast, well, they were wrong. Really, really wrong. But what the heck, I’m not afraid of much, so let’s go ahead and break down what Crazy Uncle Keith thinks 2021 will hold.

Just remember this is based on educated assumptions on my end, so if you look back in December 2021 and I got it all wrong, please accept my apologies.

Rates will go up. This isn’t exactly going out on a limb. We hit a “record low” interest rate a record number of times in 2020, and here is a 10 year chart to prove my point:

We’re looking at a historic low, meaning we can’t go anywhere but up. This will be a headwind for residential real estate going into 2021. With that, refinance if you haven’t already because by the end of 2021 rates will be higher than they are today.

Low inventory will persist. To say we had “low inventory” is like saying “2020 has had some challenges.” Bloomberg even reported that we might run out of homes in three months – no joke, they said that. That’s an inflammatory way to say new homes have a little over a three month supply, that’s the lowest level since 1963. If you overlay that low inventory with household formation numbers, you get a staggering graph. 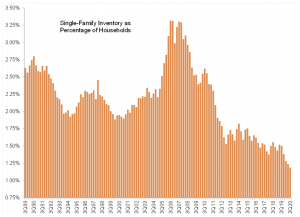 This is the graph I look at to gauge inventory levels. It’s not just about how many houses (supply side), but also how many households are going to be formed (demand side).  Viewed through this lens, we have had the hottest real estate market since 1989… by a long shot. That won’t change much in 2021. I think this graph will bottom and start to climb back up as inventory levels rise (see below) and rising rates will slow the formation of things a bit (see above). However, since it’s so low, it’s still going to feel like a constrained inventory market.

Inventory will rise in 2021. This is similar to the rate thing. It has to go up because it can’t keep going down. There is some pent up demand on the listing side, which means buyers were less afraid of traipsing through strangers’ houses a few times than sellers were about having a herd of buyers meandering through their house. A lot of homeowners put their moving plans on hold.

We were in a tight inventory market before this, and that only exacerbated the problem. Most of what I have read predicts we’ll be past the pandemic in Q3(ish) of 2021, but I’ve also read as early as Q2 and as late as Q4. As we get closer and closer to being past it, behaviors will revert to a more normal process. 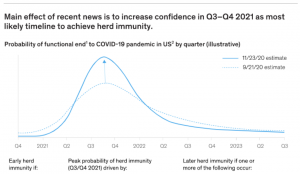 That pent up demand I talked about earlier is going to come rushing into the market while demand is high and buyers are starting to wear out. Get ready for an amazing summer in 2021. You’re going to be busy, and you’re going to have more homes to sell.

The flight of the urbanites. There has been a lot of talk about people “fleeing the cities,” and to some degree that is true. Based on a Pew Research Center study, about 28% of people said they chose to move because they feared getting COVID-19, but let’s unpack some of those numbers. How many of those changes of address forms were permanent versus temporary?  Mostly temporary.

Have some people left the urban areas never to return? Of course they have, but what makes those downtowns special will, when the world opens back up, be special once again. You can’t go see Hamilton in the suburbs, there will still be that desire for the urban experience. I think the flight of the urbanites has been a bit overstated and those same urbanites will fly back downtown once they are able again.